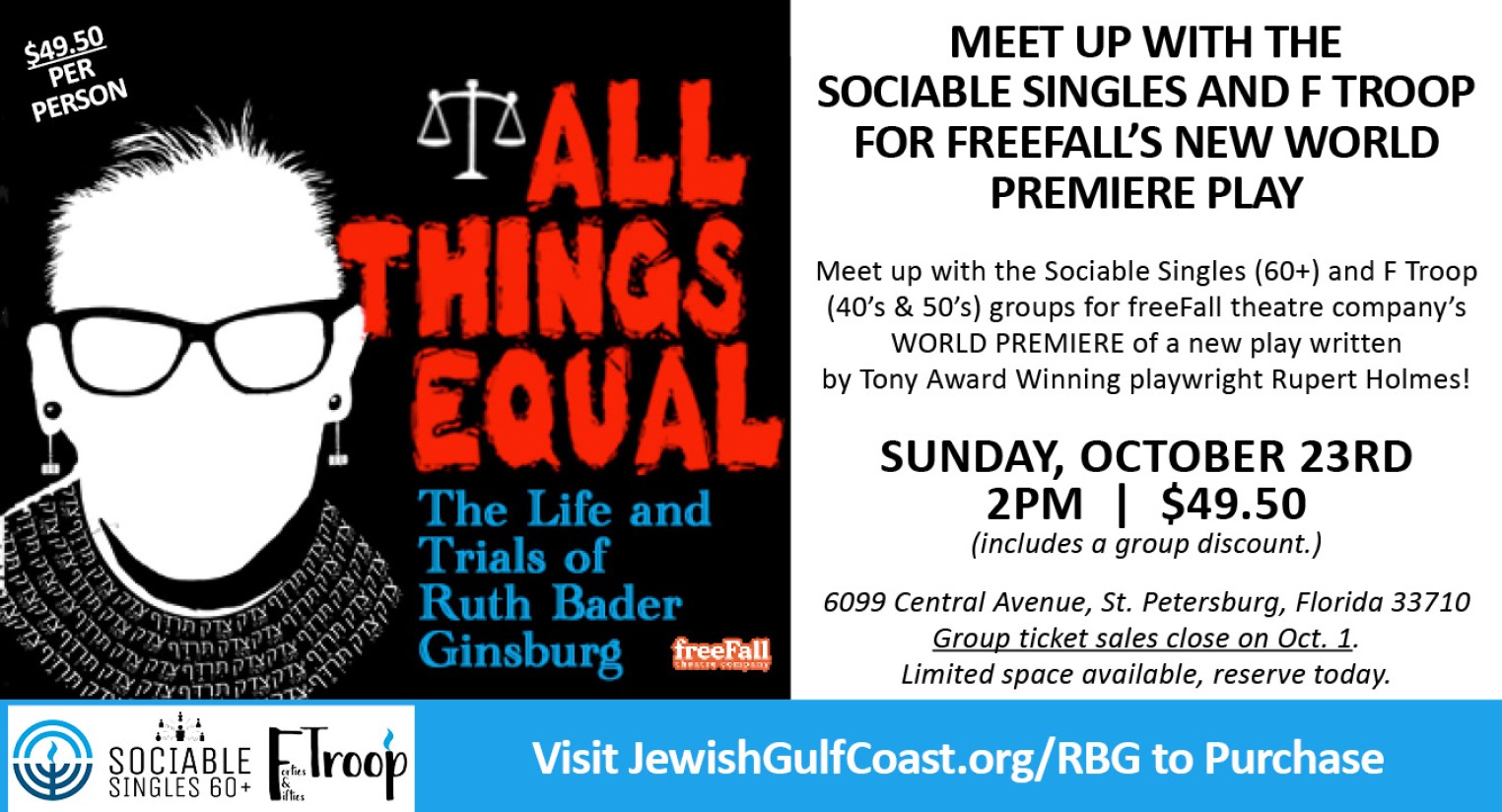 Purchase tickets below for the group discount on freeFall theatre's ALL THINGS EQUAL on Sunday, October 23rd at 2PM

The Jewish Federation of Florida’s Gulf Coast is excited to announce the upcoming opportunity for community members to attend freeFall Theatre’s World Premiere of a new play written by Tony Award Winning playwright Rupert Holmes: All Things Equal, at a discounted group rate. This event was specially selected for our Sociable Singles (60+) and F Troop (40’s & 50’s) groups. Join us on Sunday, October 23rd at 2PM. freeFall Theatre is located at (6099 Central Avenue, St. Petersburg, Florida 33710). Interested parties can learn more and purchase discounted tickets for this event at JewishGulfCoast.org/RBG.

Supreme Court Justice “RBG” welcomes a friend of the family to her cozy chambers to convey, over the course of ninety fascinating and often funny minutes, a sense of her life and its many trials: losing her mother the day before she graduated as valedictorian of her Brooklyn high school ... being one of only nine young women studying law at Harvard while also raising a daughter and helping her husband battle cancer ... fighting for women's rights in the nineteen-seventies before condescending all-male courts ... and taking courageous stands for human rights as a voice of reason amid a splintering and increasingly politicized Supreme Court. An evening with a great and compassionate icon of straight-thinking American justice emerges ... an RBG who is not only “notorious” but victorious as she takes a stand for ordinary people facing the many challenges of a changing world. Bring your scrunchies, your hankies, your humor and your heart to this entertaining and uplifting event!

The Sociable Singles (60+) group is an initiative of the Jewish Federation of Florida’s Gulf Coast. Meetings have included speakers such as Dr. Craig Klein, Shana Tibi, and Bruce Hadburg. The group has also met in person at The Nosh Pit, Grillsmith, and Rumba’s Island Grill and more. Join the group’s mailing list by filling out the form found at JewishGulfCoast.org/Singles-Signup.

The F Troop is an initiative of the Jewish Federation of Florida’s Gulf Coast for members of our community in their 40’s and 50’s. Previous events have included a meet up at the St. Pete Pier, a virtual Israeli cooking class with Michael Solomonov, and a comedy show featuring Sharon Geller. Interested individuals can join the F Troop Committee on facebook by visiting facebook.com/groups/ftroopgulfcoast.

The mission of freeFall Theatre is to pursue art’s greater purposes and the transformative power of theatre – as a builder of community, a source of upliftment, and a builder of cultural legacy. freeFall presents a varied range of classical and new works that are bold, daring, and diverse. Their work strives to be accessible, and be presented in ways that invite, entertain, and challenge audiences.

Please contact Kara@JewishGulfCoast.org or call 727 333 3103 with any questions regarding the Federation’s group outing to freeFall’s play All Things Equal.