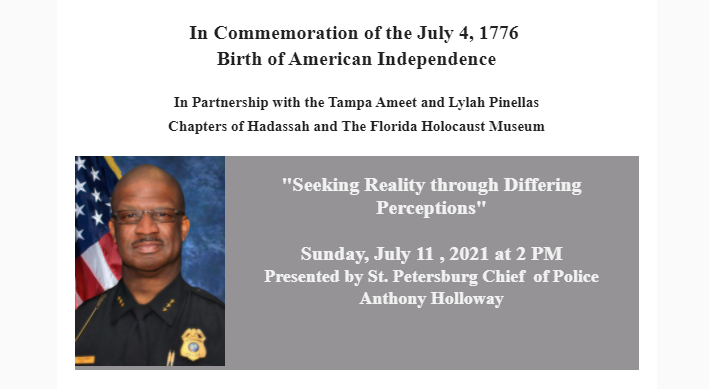 The St. Petersburg Chapter of Hadassah feels privileged to present St. Petersburg Chief of Police Anthony Holloway in a special 2 pm July 11th zoom lecture related to the Fourth of July and how the fight against injustice can be complicated by differing perspectives.   Because the topic of defeating senseless bias and the desire for harmonious relations to flourish is so critical, we invite everyone to attend this important program.   The event with Chief Holloway reflects Hadassah’s belief that the promise of an America equally fair for all should become the reality for all.   The United States Declaration of Independence, by enumerating our Nation’s founding principles,﻿ celebrates the common good and elevates a just, moral society.    Regrettably, even compassionate individuals and organizations that should embrace diversity and ﻿restorative justice may fall short.   One root cause is Implicit Bias or those preconceived beliefs transmitted to the young perhaps at age two about how certain communities behave which hopefully will be eliminated through education and life experience.   Chief Holloway has furthermore initiated yearly training for all law enforcement officers in this topic, well above the minimum standard set by Florida law of once every four years.

The aim of Seeking Reality through Differing Perceptions is to transform interactions between people to ones affirming peace and harmony.   Hadassah hopes to be an instrument of change through its emphasis on informative talks such as this one and create a more inclusive society.   Hatred between individuals and against groups manifested in the past by the green benches on which African Americans were not allowed to sit, the recent vandalism at The Florida Holocaust Museum, and intolerant attitudes of all forms should cease.   We may have been reared with certain implicit notions regarding age, disability, ethnicity, gender, race, sexual orientation, but it is up to us as knowledgeable, responsible human beings to eliminate unconscious biases and behave in a manner so that a kinder, more perfect America may emerge.

We hold these truths to be self-evident, that all men are created equal,
that they are endowed by their Creator
with certain unalienable Rights, that among these are
Life, Liberty and the pursuit of Happiness.
Share